TMG Holland BV is a third generation family business that specializes in the development and production of Sanitary Stainless Steel Valves for the Dairy, Food and Beverage Industries.

With over 70 years of experience in these industries we can provide our customers the very best of our valves. We produce and supply small series, large series, singles and custom made specials to help our customers to get the job done.

Being certified by 3-A Sanitary Standards Incorporated, and strictly making use of materials which also meet the European rules and regulations (EC)1935/2004, makes TMG Holland the most outstanding partner in the manufacture and supply of High-Quality Sanitary Valves.

At TMG Holland, our customers’ needs have always been our focus. We are a motivated company that takes pride in our products and our commitment to providing excellent service to our customers. Our modest size allows us to react quickly to create solutions for our customers.

Interested in our valves? We provide customized solutions to fit your needs.

The company was founded in 1950 in Garijp, The Netherlands, by Hendrik de Haan under the name H. de Haan Zuivelwerktuigen. His job was to install pipes and machines in dairy factories.
He eventually came into contact with APV England and made an agreement with them for the supply of stainless steel fittings (appendages). The company name was then changed to Appendagefabriek H. de Haan.

In the early 1960s, Stork Amsterdam (now JBT Food & Dairy Systems) contacted Hendrik with the question whether he could supply air-actuated valves. The market in the dairy industry was growing and changing, and automation was on the rise. Stork had started building machines for processing UHT milk (Ultra High Temperature). They were looking for a valve that could withstand high temperatures and high pressures. In addition, it also had to be completely sterile.
Hendrik definitely wanted to work with Stork, so he started to develope and produce such a valve. This valve, which was further developed in the following years, is now our current N7 valve series.

In the early 1970s, Hendrik developed and produced the Minidisc® valve together with friend Sam Luksenberg to be able to serve the American market as well. Sam then founded Lumaco Sanitary Valves in America and started selling the Minidisc® valves in America and Canada. A great collaboration arose between De Haan Appendagefabriek and Lumaco Sanitary Valves. In order for the Minidisc®valves to comply with the rules and regulations of the American market, an application was submitted for 3-A Sanitary Standards Certification. This important 3-A certification was awarded to both our Minidisc® valve series and N7 valve series.

In the early 1980s, Hendrik's son, Gerben de Haan, took over the company and continued under the name De Haan Appendagefabriek BV. Still located in an old dairy factory in Garijp. In the years that followed, Gerben expanded, renewed and adapted the product lines to the demand of the customer and the industries. The company and our products became more and more known worldwide.

In 1999 Gerben’s daughter, Tamara Dusselaar–de Haan, joined the company as executive secretary and she was responsible for the administrative and financial department. When Gerben also wanted to retire, Marc Klijnstra joined the company in 2012 as technical and commercial manager. With a lot of enthusiasm and passion, Marc and Tamara have further developed and expanded the product lines, and made the company what it is today. In 2019 they took over the company from Gerben and continued under the name TMG Holland BV, now located in Suameer, The Netherlands. Unfortunately, Marc Klijnstra couldn’t be part of the TMG Holland team very long because he passed away suddenly in April 2021. Tamara is now continuing the business. 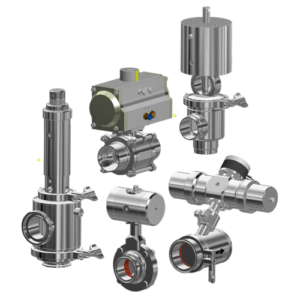 We provide customized solutions to fit your needs.
Contact us